When I play horror games, I expect to get weirded out. It's part of the fun! The Static Speaks My Name, however, was a total gut punch. I didn't have any words when the experience was over.

The Static Speaks My Name was released a few weeks back, a one-man creation by designer Jesse Barksdale. It's been in my head for days, and I want to show you why. You could play the game yourself—it only takes 10 minutes to finish—and it won't cost you a dime. It's right here.

If you'd like to take a journey with me, we'll walk through the game together.

The game opens in a space-y environment, letting the player move up, down, left, right, forward, and backward. It's wildly disorienting, but in the distance, there's a hovering bit of...something.

What is that? Moving closer, a slice of text appears on the screen. It's referencing a person.

Method? Asphyxiation by hanging? Apparently, someone named Jacob Ernhaltz has died. I spent a few moments walking around the fuzzy object, but there was nothing else to do. I walked into the grey mass, and the game quickly transported me somewhere else.

"Today will be a better day." That's a kind sentiment, even if the poster itself is pretty creepy.

An alarm clock pulses over and over, and my character (Jacob?) makes his way out of bed. Once I turn off the alarm, the game prompts me with my first objective: use the bathroom.

There's a bathroom attached to the bedroom, so I decide to poke around a bit. I can't seem to brush my teeth, turn on the shower, or do anything else. Then, I noticed the toilet. 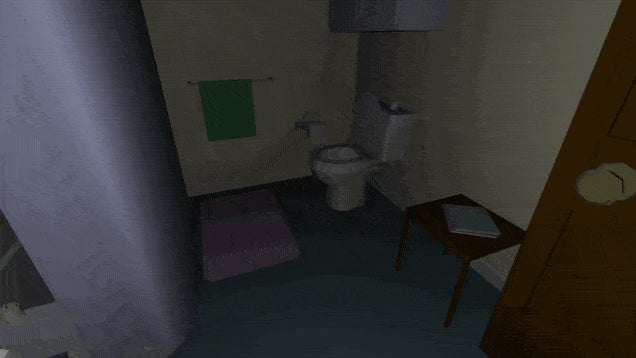 I can appreciate any video game with a functioning toilet system. In fact, it's usually the first thing I mess around with, just to get a sense of how much interaction is featured in the game.

My business taken care of, the game offered me a second objective.

I seem to remember my alarm clock saying it was just after 3:00 a.m., but maybe I have to work early? You never know. Plus, the game's saying this is what I have to do. Am I gonna say no?

Just down the hallway, I hear a familiar static. When I was in middle school, I used to get this buzzing in my ear when the teacher forgot to turn off a classroom television. It doesn't happen to me anymore (or maybe TVs don't give off that signal anymore), but there it was again.

Huh. That's a lot of TVs. And are all my doors boarded up?

As I look for the kitchen, I stumble upon another room full of, well, you should just take a look.

It seems Jacob is obsessed with this particular picture, and it goes far beyond wanting multiple copies hanging up in a bedroom. Jacob has been spending signifiant time dissecting its origins.

Jacob's even trying to figure out what island could have inspired this painting. Dedication? Obsession? It's probably a blurry line between the two. The whole room is dedicated to this.

Confused, I leave the room and head to the kitchen. What I find is not particularly encouraging.

There's no shrimp in the refrigerator or the kitchen. Didn't I notice shrimp in my bedroom? 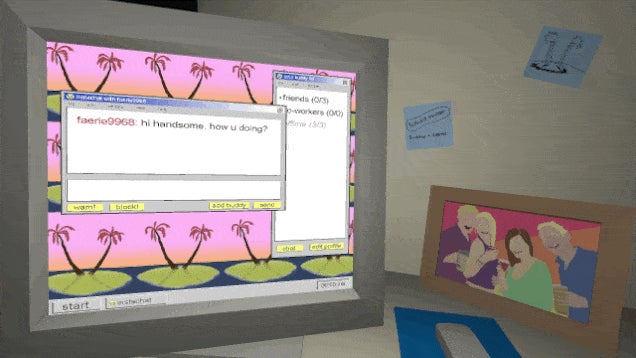 You have two options, if you didn't catch that.

Press 'G' to say you've embarrassed everyone who believed in you

It doesn't matter what you end up typing, as Jacob isn't capable of holding a conversation with a bot who's more interested in his credit card information than anything else. You quickly leave.

While getting up from the computer, though, I found a note that immediately raised eyebrows.

"Mom, I guess I'm supposed to write a note? I don't want you to blame yourself. And with dad gone, I'm sorry I have to leave you too. Please don't be angry with me."

Contemplating this, I look away, and the game provides me with another "helpful" objective to clean the nearby microwave. I suspect the microwave has mostly been used to heat shrimp, but after grabbing some nearby paper towels, I have the microwave looking practically brand-new.

So far, the "objectives" have been pretty simple. What's next, replacing a light bulb? Not quite.

You've read that right. "Decide what to do with the man in the cage." What the fuck?! But suddenly, I remembered there were some other weird things littered about the apartment that I hadn't looked at very closely. In this new context, these documents were now very important.

There are paintings all over this god damn apartment and a painter has gone missing. Shit.

None of the doors would open, though. I couldn't figure out what to do next, until I decided to explore the room full of paintings and found yet another document that seemed innocuous.

These are instructions to access a hidden room in the apartment. If I remember correctly, there was a bookshelf hiding behind the door that lead into my apartment. I made my way back there. 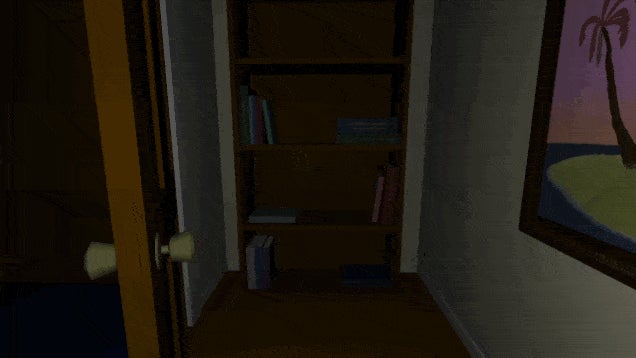 If it wasn't clear already, it is now. Jacob's not well. I don't want to know what's around the corner, but we've come this far, and there's no turning back. I keep walking.

At first, this doesn't seem so weird. Of course there would be more paintings. Then, glancing at the corner, you notice the cage. Then, you notice what appears to be a leg. IS THAT A LEG? 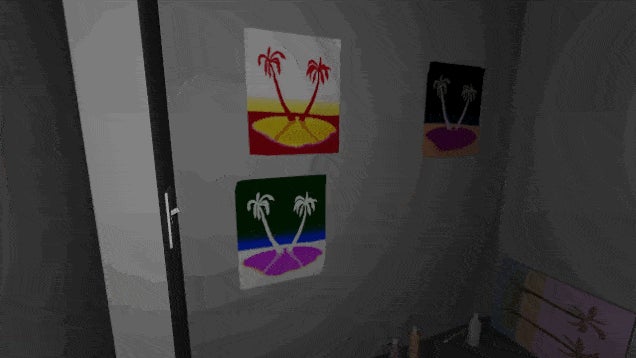 Yep, that's definitely a human being in a cage. The only option I'm given is to unlock the cage. The man, who I presume is the painter from the paper, is not making any noises. He's silent.

And it appears I've been feeding him shrimp, too. This is horrifying. With the cage unlocked, though, I'm not sure what's supposed to happen next. Naturally, the game was ready for me.

I presume this meant sleep, but as I poke around the bed, nothing happens. There's no prompt that will let me lay down and move on from this nightmare. There is, however, a single door in the apartment that I haven't opened. It's a closet that's positioned right next to the bed frame.

Unsure of what to expect, I open the door. 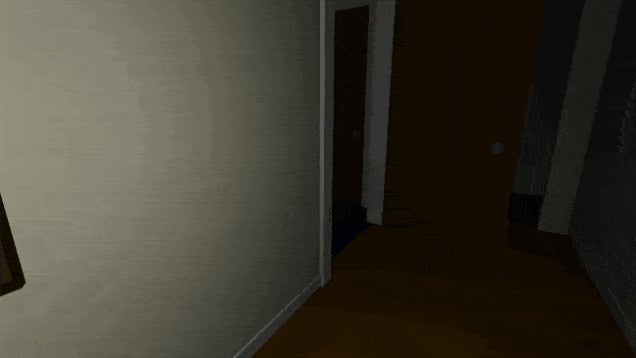 I spent a long time staring at this noose. When I moved closer, my heart sunk into my chest.

That's the only option. There's nothing else to do in the apartment. I considered turning off the game. It's one thing to watch someone commit a horrible act in a movie or a book. You're disconnected from the experience. If what happens next is what I expect happens next, I'm complicit in the act. The game is designed to elicit this emotion, but it's no less upsetting.

Eventually, I cave. I do what the game asks. 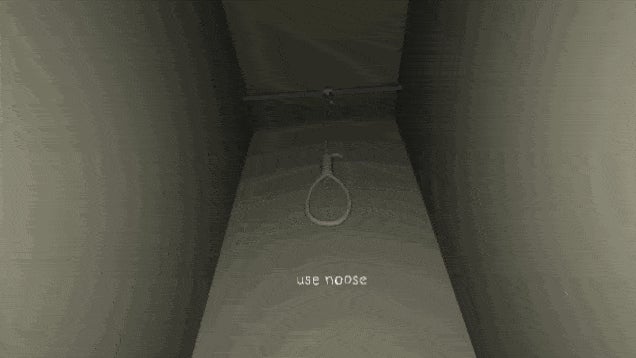 The next few moments are horrifying. You can't tell through the GIF, but The Static Speaks My Name doesn't have much in the way of sound effects. Here, the game is dead silent, except for the noises of a man choking to death and dying.

I sat in silence for a few moments after this happened. I was streaming the game for an audience, and wasn't sure what to say. The horror games I'm used to playing for an audience are of the Five Nights at Freddy's variety, games with scares designed to make me shriek. This was something profoundly different, and there was no way to spin this as something to laugh at.

The game cuts to black, and I'm back at the start. This time, there are several orbs around me.

As with before, each one seemed to represent the death of a person.

When I entered into the mist, the credits started to roll. This is what the game leaves you with:

"Thank you for playing." That's not the sentiment I was expecting.

It was tough to understand those 10 minutes with The Static Speaks My Name. Was there a reason to experience that? Did the game have a message that I'd somehow missed out on? I asked the game's designer, Jesse Barksdale, both of these questions in an email today.

"My intention was to create an experience with an emphasis on story, character and emotion, not gameplay," he said. "Kind of a right-brain game. To create something that made you feel like you were someone else, but not as an escape. Most games are kind of escapes from reality and I feel like this is maybe the opposite? Like it's an attempt to replicate that rawness that we all sometimes experience. I honestly am not sure if I accomplished that, but that was my intention. As for a message, there is definitely meaning for me but part of the game is about deciphering the meaning behind this character's world, so I feel like it would go against the point if i got too much into that."

I've never played anything like The Static Speaks My Name. I'm not sure I need to.

If you'd like to watch me actually play the game, you can do so here.

Source : kotaku[dot]com
post from sitemap
The First Photo Of Zayn Malik Post-Quitting One Direction Is HERE! Is He Starting His Solo Career Already?!
Taylor Swift Is Dating Calvin Harris & She Doesn't Care Who Knows — The Pair Were Spotted Getting All Snuggly At A Kenny Chesney Concert!!