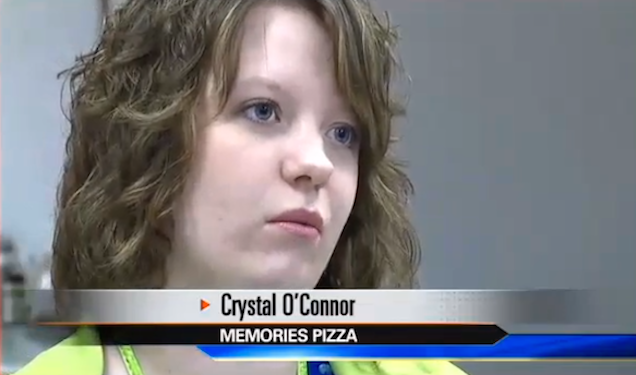 The owners of Memories Pizza, the Indiana restaurant that preemptively refused to cater a hypothetical gay wedding, have reportedly gone into hiding after receiving a barrage of online criticism and, more importantly, over $500,000 in donations from supposedly like-minded bigots.

Crystal O'Connor of Memories Pizza in Walkerton, Indiana, has her finger on the pulse of what… Read more Read more

Earlier this week, Crystal O’Connor and her father, Kevin, who co-own the pizzeria, made it very clear that their restaurant supported Indiana’s new Religious Freedom Restoration Act, in part because it allows them to avoid catering gay weddings.

The online blowback to their stupidity was immediate and overwhelming, and the pizzeria temporarily closed its doors yesterday as a response. Good!

But as people were leaving bad reviews and homoerotic pictures on the pizzeria's Yelp and Facebook pages, conservatives across the country were donating thousands to the O’Connors through a Go Fund Me page. Yesterday morning, the figure stood at $60,000; by 10:30 am Friday, the total has surpassed $520,000. And now, the Associated Press reports, the family has gone into hiding.

Did the O'Connors take a principled stand? Or was their now-infamous interview part of an elaborate ruse to scam a small fortune from stupid but generous bigots and then skip town? Is there a faster way to make $500,000 in America in 2015 than by refusing to cater a hypothetical gay wedding? Only time will tell.

Source : gawker[dot]com
post from sitemap
WOAH. Did Amber Rose Just Confess Her True Feelings For Wiz Khalifa?? Love Is In The Air!
Khloe Kardashian Calls Out Jamie Foxx For The 'Low Blow' Joke Made Against Bruce Jenner During The iHeartRadio Music Awards