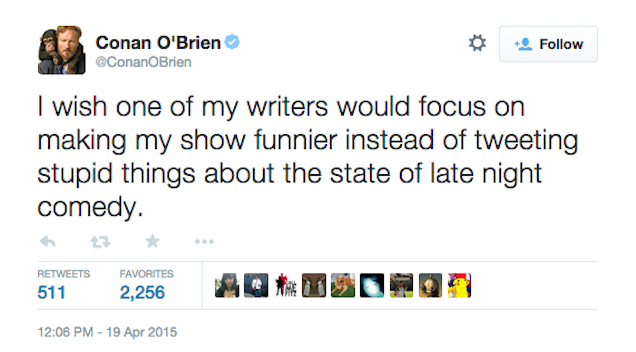 A long-time writer for Conan O’Brien went on a quickly-deleted Twitter rant last week about the current late night comedy landscape, resulting in a less-than-flattering response from his boss Sunday.

Andrés du Bouchet—Conan’s writer for the last six years—ultimately deleted the majority of his tweets, which appeared to be aimed at Jimmy Fallon’s celebrity-intensive Tonight Show and some of the other, more inane late night cable TV shows.

The word "epic" is by far the most tossed-around of all the Internetisms. Read more Read more

For his first official Lip-Sync Off as host of the Tonight Show, Jimmy Fallon picked a formidable… Read more Read more

Still, some of the messages were preserved by Uproxx:

Comedy in 2015 needs a severe motherfucking shakeup. No celebrities, no parodies, no pranks, no mash-ups or hashtag wars. I’m fat.

@dubouchet and shove your lip-synching up your ass.

Prom King Comedy. That’s what I call all this shit. You’ve let the popular kids appropriate the very art form that helped you deal. Fuck.

None of the funniest stuff ever involved celebrity cameos.

Once again I’m a bonehead for tweeting as a fan of comedy instead of as a guy who earns a living doing it.

@guybranum thanks but now comes the inevitable dressing down at work for criticizing other talk shows!

@dubouchet add games and lip synching and nostalgia and karaoke to this list.

Sorry for being a bloviating elitist windbag last night. I know tons of talented people are making the stuff I enjoy shitting all over.

Not that he’s wrong? But there’s a more important lesson at play here: Never Tweet.