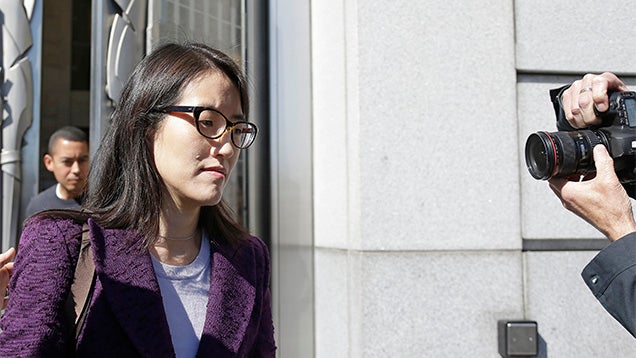 Yesterday, Ellen Pao stepped down as CEO of Reddit. Co-founder Steve Huffman will take her place. Pao’s resignation came after a week of heightened tension at the company and on the site, but her tenure had been fraught with controversy and backlash from the sites users since it began.

Ellen Pao joined venture capital firm Kleiner Perkins Caufield & Byers in 2005. By 2012, she was a partner. In May of that year, she filed a sexual harassment lawsuit against the company. Pao’s suit alleged that she was sexually harassed by her superiors and denied a promotion because of her gender.http://gawker.com/a-guide-to-the...

“The firm regrets that the situation is being litigated publicly and had hoped the two parties could have reached resolution, particularly given Pao’s seven-year history with the firm,” Kleiner spokeswoman Christina Lee told Reuters at the time. “Following a thorough independent investigation of the facts, the firm believes the lawsuit is without merit and intends to vigorously defend the matter.”

A few months later, Pao was fired. A spokesperson for the firm said that Pao’s employment hadn’t been terminated, but that “Kleiner approached Ms. Pao to facilitate her transition, over an extended period of time, out of the firm.” Pao emphatically maintains that she was fired as a result of the suit.

Pao was initially hired by Reddit as head of business and partnerships. “She’ll be working on helping us build strategic partnerships that benefit the community,” the blog post announcing her hiring reads. Pao wrote at the time:

My favorite subreddits are /r/IAmA and /r/pareidolia (I like people even when they’re not real). Being part of a community of people who care is inspiring and energizing. reddit has so much to offer so many people, and I’m excited to find partners to help make reddit even more awesome.

Pao was promoted to the position of interim CEO after her predecessor, Yishan Wong, resigned after an irresolvable dispute over office space.

(By way of explanation for Wong’s sudden departure, Sam Altman, Reddit’s “lead investor” and president of Y Combinator, wrote on his blog: “The reason was a disagreement with the board about a new office (location and amount of money to spend on a lease). To be clear, though, we didn’t ask or suggest that he resign—he decided to when we didn’t approve the new office plan.” Okay.)

March 2015 – Pao loses on every count of lawsuit

A jury in San Francisco decided in favor of Kleiner Perkins on each of the suit’s four counts.

The ruling on whether she had been fired in retaliation for filing the suit required furthe deliberation, but the jury ultimately came down on the venture capital firm’s side.

Pao had sought $16 million in damages.

“Men negotiate harder than women do and sometimes women get penalized when they do negotiate,” Pao told the Journal. “So as part of our recruiting process we don’t negotiate with candidates. We come up with an offer that we think is fair. If you want more equity, we’ll let you swap a little bit of your cash salary for equity, but we aren’t going to reward people who are better negotiators with more compensation. We ask people what they think about diversity, and we did weed people out because of that.”

After 10 years in existence, Reddit introduced its first explicit anti-harassment policy, though it wasn’t much of one, as it allowed subreddits like /r/CoonTown and /r/GasTheKikes to remain active.

On June 2nd, Pao’s attorney filed a two-page notice of appeal with the San Francisco Superior Court. The intial filing did not include an explanation for the grounds for appeal; such an explanation is not immediately required.

On June 10th, “based on their harassment of individuals,” Reddit banned five subreddits. “The only banned subreddit with more than 5,000 subscribers is r/FatPeopleHate,” administrators noted at the time. The others were /r/HamPlanetHatred, /r/Neofag, /r/ShitNiggersSay, and /r/Transfags.

In their place, several subreddits dedicated to harassing Pao were formed, including /r/EllenPaoHate, /r/EllenPaoIsACunt, and /r/EllenPaoMustResign.

After Victoria Taylor, Reddit’s director of talent and liaison between the /r/IAmA community and celebrities’s public relations teams, was mysteriously fired, shit went completely sideways. Anyone who wasn’t already throwing a tantrum did so, and anyone who already was threw a blood clot. Moderators started shutting down huge swathes of the site, and users vomited racist, sexist bile all over themselves.

I want to apologize for how we handled the transition yesterday. We should have informed the moderators earlier and provided more detail on the transition plan. We are working to make improvements and create the best experience for our users and we aren’t always perfect. Our community is what makes reddit, reddit and we let you down yesterday.

It’s still not clear to what extent Pao was responsible for Taylor’s ill-advised firing, but the abrupt removal of one the site’s best-known and most popular moderators gave the community’s sizable population of otherwise even-tempered non-misogynists reason to join the mob calling for her head.

The babies—aided by the huge public outcry over Taylor’s firing—got their way: Pao resigned on Friday, replaced by Huffman, one of the site’s co-founders. To be sure, Pao and her employees mishandled the Taylor firing, but the reaction was outsized, and without the mass of undeserved bile that had already been heaped on her, it seems unlikely Pao would have been forced out.

The New York Times reports that Pao will remain an advisor to Reddit’s board through the end of the year while her appeal moves forward. Otherwise: “I plan to get a lot of sleep,” she said.