Your 2014 record: 6-10. If you are the New York Giants and you didn’t win a Super Bowl, you probably went 6-10. FUN FACT: The Giants have won more than 12 games once in the last 30 years. They are the most accomplished mediocre franchise in sports history.

“I don’t trust the lady in GPS, I don’t trust her, because they don’t send you the right way. I hit the button and I go ‘Park Ridge, New Jersey.’ And she comes back on, she’s giving me directions. So now I figure out where I am. I hit the thing and I said ‘Thank you very much, I know exactly where I am now.’ And she comes back and says, ‘You don’t have to thank me.’ I swear to God that’s what she said. And then I couldn’t get her to shut up. Every turn. ‘Take a right here.’ I know where I am. I know where I am. I’m a block away from my house and she’s telling me where to go. I said ‘I know where I’m going.’” 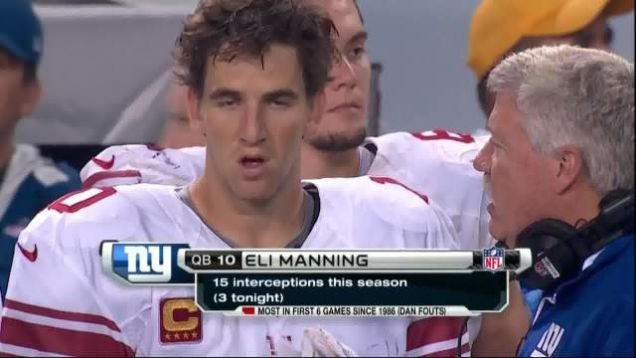 What’s new that sucks: Well, JPP blew his hand off. Apart from That Catch, this is arguably the most exciting thing to happen in Giants football since the last Super Bowl victory. When you’ve got Eli Manning tossing picks and Tom Coughlin doing his hands-on-hips old man pose, you need a few exploding hands and clumsy airplanes to keep the fanbase awake.

Speaking of explosions, tackle Will Beatty will miss most (if not all) of the entire season with a blown-up pec muscle, which means the Giants will protect Eli about as well as they protect their medical records.

Also, the team signed Shane Vereen away from New England. I know a little someone who’s about to get 50 incomplete fade route passes thrown his way! The most successful play in the Ben McAdoo playbook is the failed fade route.

What has always sucked: Every year we do these previews, and every year the Giants are the hardest entry because they are never, ever, ever different. They still have Eli and Coughlin. Can’t one of them just DIE? That’s what it’s gonna take for them to finally go away: some horrible bus accident that lops Eli’s head clean off, with his mouth still open, his face still looking like his mom made him try on a shirt he doesn’t like.

Given Eli’s pattern of winning a Super Bowl every four years, the Giants are actually on track to win their fifth Super Bowl this season. And even if that happens, Giants fans will still bitch because NO ONE ever thinks the Giants are the best team when they win a title. Because they are not. 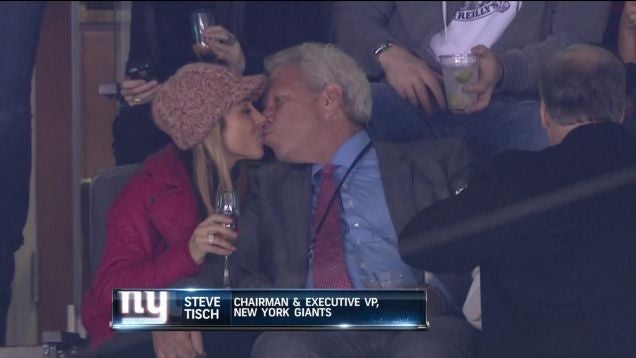 And are really this…

And frankly, the city they claim to represent is no longer the Greatest City In The World. Have you been to New York lately? It’s a fucking trash pile. New York was already a town of starry-eyed yokels, conformists doing a stint in the big city before settling down on the set of a John Hughes movie, legit war criminals, and what not. But now it comes with a permanent toilet aroma. Every sidewalk is blocked by a construction scaffold that is just ACHING to crush you. Buildings are randomly exploding. Puddles of green liquid abound. No one lives in Manhattan anymore because the Chinese use all the available real estate for money laundering. It’s more expensive than ever. There’s more garbage than ever. And there are more artisanal mayo salons than ever.

New York is a self-imposed prison where people convince themselves to live in rat-infested shoeboxes that each cost more than a mansion in the Poconos. Then they spend every summer getting on overheated, nonfunctional trains to vacation where every other New Yorker is vacationing. Even the suburbs are cramped and impossibly expensive. Cool, inexpensive neighborhoods get ruined overnight by trust fund babies opening vegan teahouses. YOU’RE NEXT, ASTORIA. There is no escaping the cramped-ness. There is no escaping that the walls are closing in on you at all times, and that your children will need a $70,000-a-year private school or they will DIE. The city has become an unlivable, hideously expensive mess. New York hates human existence. New York is a shitty Jay-Z song where he’s going on about how great he is and everyone pretends not to notice he’s a wheezing old butt rocker.

And there are STILL no tight ends. 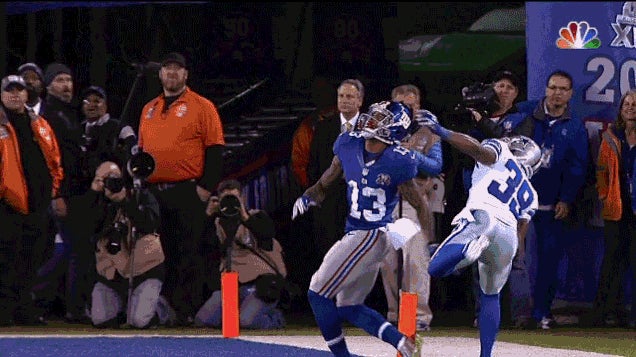 No offense to youngin, but my hair is 10x better than that

All it took was one year in the league for this man to become everyone’s favorite NFL player despite having a terrible haircut. The man even gives you Tinder credibility… 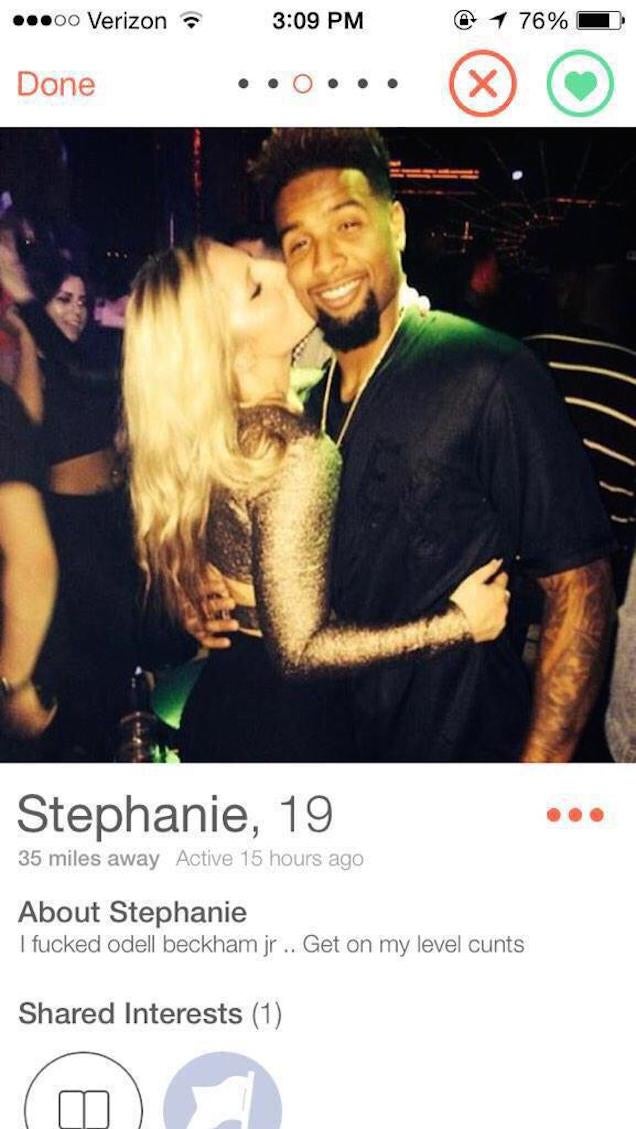 Yeah! Get on her level, cunts.

Hear it from Giants fans!

We find stupid things to get mad about and to build up an imagined “nobody believes in us, everybody hates us, we’re the worst” mentality. We complain about probably being an 8-8 team every year, even though we won TWO SUPER BOWLS this decade. We complain about our QB even though everyone has to know by now that he’s totally mediocre but occasionally able to lift his play to good enough to win a Super Bowl. We complain about the stadium, even though it’s brand new, the parking is better than it used to be and it’s not a bad stadium at all, especially compared to lots of other new monstrosities. We complain about the other Giants fans, even though most of them are just fine, even if they’re a little quiet. Just look at the rest of the division - we have the assholes in Philly, the racists in Washington and the rednecks in Dallas. How can we complain this much? Just look at the standings and see how bad it could be!

Instead, we develop our usual complex and start bitching about everything. Things aren’t that fucking bad. If you asked every team in the league if they’d take a shaky QB, a brand new stadium with some parking problems and 2 Super Bowls in a decade, they’d say yes. But no - we have to bitch about it. WE are the reason the Giants suck - because we can’t deal with being above-average but not the best team in the league.

Because the defensive centerpiece of our franchise almost Darwin’d himself while lighting a fucking firework.

During the draft I tried texting my friend about our first round pick and my phone autocorrected his name to “erect flowers”, so now I have that image in my head.

Our owner spent more time last season making back room deals with the Rooneys and the Ginger Hammer to cover up the Ray Rice debacle than giving a shit about his team missing the playoffs 3 years in a row .

If I see one more “Is Tom Coughlin on the hot seat?” article I will lose my fucking mind.

Mark my words: they still will not be the type of awful where they lose 12-13 games, get a high draft pick and get to plug the glaring hole at linebacker or offensive line. They will start fast at 6-2, then shoot themselves in the thigh and lose 5-6 games in the second half.

As far as I can tell the front office stopped following Steve Spagnuolo’s career from 2009-2014.

They had one fun pick – David Wilson – and his neck dissolved.

How many times do I have to watch Rueben Randle run a route out of bounds? It’s almost as if he is wearing a helmet specifically blinding his peripherals enough to not know where he is.

Will Beatty missing the entire season is the best thing to happen to the Giants O-line.

When we’re in private, we do nothing but praise Eli and thank God that our QB situation is steady while we watch teams like the Jets and Bucs perpetually re-lighting their respective dumpster fires. Show up to a game or a bar full of Giants fans, however, and all you’ll hear is “Fucking Eli” while we blame our QB for every bad play and mock his sad little Charlie Brown shrugs after Larry Donnell drops another pass.

I picture the thought process for the stadium location as John Mara taking a sterilized stainless-steel frisbee and chucking in into the woods.

Fuck Quentin Demps with a guardrail from the NJ Turnpike.

When I attended Syracuse University I had classes with Ryan Nassib and Justin Pugh. I had 3 years of accounting classes with Nassib, never heard the guy speak once. Pugh also cheated off one of my tests in Statistics class Sophomore year. Wasn’t a big deal until I saw his best Will Beatty impression last season. Should have reported the fucker.

I once found myself sitting in season ticket holder’s seats at a NY Giants game. Seated next to us were some young kids and their dad. Seated in front of us was a woman in her mid-late 30s whose friend (a woman as well) had a Giants logo tattooed on the back of her neck. She turns to the Dad with the kids and says: “I apologize in advance for the words that are gonna come out of my mouth” and proceeds to scream, shout, endlessly heckle the opponents and eventually label all of us, even the kids, “faggots” for not cheering loudly enough.

I was high at the time and loved every minute of it, as did the kids.

New Jersey? You bet your ass.

We’re still hesitant to sign a two time Super Bowl MVP to a deal. Like....really really slow playing this. And we all kinda agree with the strategy.

Our best defensive player blew off a fucking finger playing with fireworks.

Our best offensive player is appearing on the cover of Madden this year, which means he will probably tear his ACL picking up his dry cleaning tomorrow.

We share our ridiculously inconvenient stadium with The Fucking Jets.

JPP losing a finger is the perfect analogy for this team: everything about it is pretty much the same from last year, but worse.

I. The man who is supposed to be the star of our defense lit his hand on fire and wanted the team kept out of his hospital room so they wouldn’t know the severity of his injuries. This is the second most interesting thing that the Giants have done in free agency in the last ten years, behind the time one of the stars of our offense shot himself in the leg.

II. We apparently had zero backup plan to Brandon Scherff in the 2015 draft. “Shit, shit, shit, TAKE THE NEXT LINEMAN, WHO IS IT, DON’T CARE.”

III. Eli Manning is now at the point in his career at which we will not go anywhere with him, but if we get rid of him we’ll definitely be worse.

Four weeks into the 2014 regular season I was convinced that we needed to give up on Odell Beckham Jr. because he was “injury-prone”.

Pretty sure at camp Old Man Coughlin serves water to his players with a ladle.

The Giants are literally three historically lucky plays from being just another team.

We will lose to the Eagles even though they’ll be starting Mark Sanchez.

Their injury list, before training camp has even started:

Jason Pierre-Paul, 1 finger (Loves America but Is a Moron)

Just to be clear, that is our starting left tackle, our best defensive end, two out of three of our best wide receivers, and the guy who would be our starting middle linebacker if he could survive long enough to play double-digit snaps in a season.

Because JPP nearly blowing off his hand was only the second dumbest thing a former Giant pro Bowler has done with a firearm or explosive.

$90 tickets for the worst seats in the house.

Somebody tell me how I’m supposed to feel about Eli. I literally have no idea.

Submissions for the 2015 NFL previews are now closed. Next up: The St. Louis Rams.