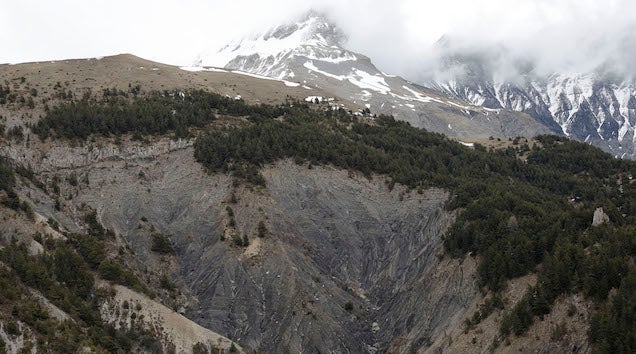 New audio recovered from Germanwings flight U49525 indicates one of the pilots had been locked out of the cockpit moments before the plane crashed into the French Alps Tuesday.

According to the New York Times, one of flight's two pilots left the cockpit for unknown reasons around 10:30 am Tuesday.

As officials struggled Wednesday to explain why a jet with 150 people on board crashed in relatively clear skies, an investigator said evidence from a cockpit voice recorder indicated one pilot left the cockpit before the plane's descent and was unable to get back in.

A senior military official involved in the investigation described "very smooth, very cool" conversation between the pilots during the early part of the flight from Barcelona to Düsseldorf. Then the audio indicated that one of the pilots left the cockpit and could not re-enter.

"The guy outside is knocking lightly on the door and there is no answer," the investigator said. "And then he hits the door stronger and no answer. There is never an answer."

He said, "You can hear he is trying to smash the door down."

Authorities say they've found no indication of low air pressure, a midair explosion or any other technical malfunctions and say they are still examining "the possibility of deliberate human responsibility."

Still, it looks like definitive answers are a long way off. According to reports, the flight data memory card—which contains information on the plane's altitude, speed, location and condition—was missing from its casing. Investigators say it may have been dislodged by the intense impact of the crash.